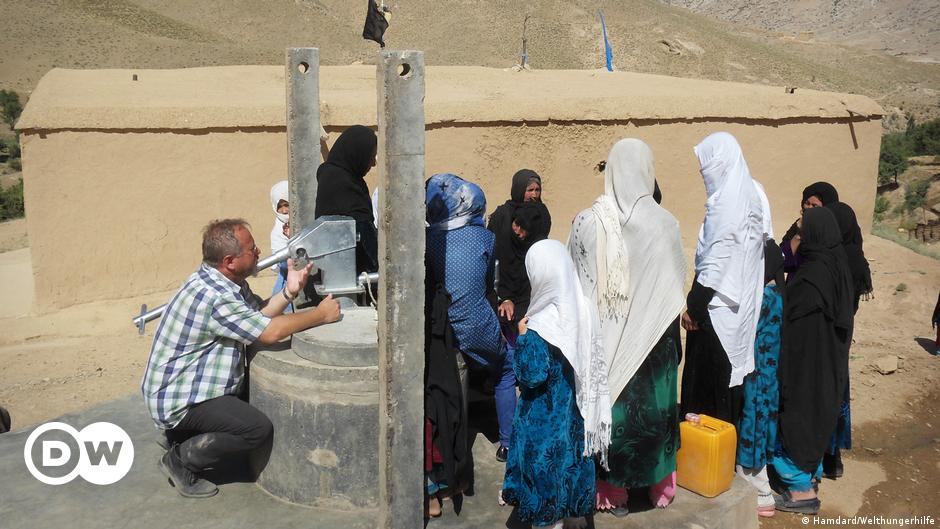 Help is needed on all fronts. One in three Afghans does not know where their next meal will come from, UN Secretary General Antonio Guterres said in early September. By next year, 97% of the country’s roughly 40 million people could be living in poverty.

“The situation in the country is getting worse by the day,” Simone Pott of German aid organization Welthungerhilfe told DW. Villages in the north of the country suffered greatly from the fighting even before the Taliban took power two months ago. Schools and clinics have been destroyed. “The situation for people, for families, is quite difficult,” she said.

Doctor Tankred Stöbe experienced this suffering with his own eyes. He was in Herat, western Afghanistan, at a Doctors Without Borders clinic just a few weeks ago, where he saw severely malnourished children and people coming to the clinic from other parts of the country. because their crops had failed. “We treated an 18 month old child who weighed only 3.5 kilograms and was practically dead,” Stöbe told DW. Clinic staff were working to their limit, treating 400 patients a day instead of the 200 it was designed for.

Stefan Recker currently heads the Caritas office in Kabul from Germany. He says he wants to return as soon as possible, but the security situation does not allow it. “Street theft in remote areas is a problem in a way that it was not before the takeover. In Kabul there have even been kidnappings of wealthy Afghans.” Caritas leaders fear that Recker may also be at risk of kidnapping if he returns.

Caritas, Welthungerhilfe and MSF cite the collapse of the Afghan economy as one of the biggest problems. Syed Moosa Kaleem Al-Falahi, director of the Islamic Bank of Afghanistan, one of the country’s leading financial institutions, recently told the BBC that the Afghan banking system was on the verge of collapse. Long queues are already forming outside banks with people trying to withdraw their savings as cash runs out. Even before the Taliban took power, Afghanistan was heavily dependent on foreign funds. Now these funds are frozen because of the sanctions.

This had serious consequences for the health sector. MSF’s clinic was inundated with patients as government clinics closed, Stöbe said. “Doctors haven’t been paid for months. The Afghan health system has always been bad, but now what little there was is collapsing. We are trying to absorb it, but we cannot.”

MSF had planned to close its COVID-19 clinic, but now that another hospital has closed, the organization has decided to increase the size of the clinic instead.

Women who live in fear

Afghan women are suffering not only from economic decline, but also from the Taliban takeover. In many places, girls are no longer allowed to attend secondary school or study at university. Humanitarian organizations are also feeling the effects. “We have a lot of young single women working for us,” says Recker of Caritas. “They are afraid of being forced to marry a Taliban fighter.” As a result, they no longer come to the office and try to work from home. Although the danger is greater for women, men also live in fear. According to Recker, Caritas has set up a special team system so that not all local employees have to go to the office and can work from home as much as possible.

Welthungerhilfe is also seeing changes for women. “In the north of the country, there are a lot of female-headed households,” says Simone Pott. These families in particular face major problems, she says, as women cannot go out without male accompaniment and also have no income.

Above all these developments looms the approaching winter, which aid organizations fear will only make the situation worse. Welthungerhilfe is currently planning so-called winter aid. Blankets will be distributed as well as hygiene kits for women with sanitary napkins and water. But here too, the organization is faced with logistical problems. “How do we pay for the blanket seller? How do we get these things across borders,” Pott explains. “It’s a real logistical challenge. We talk every day and try to find a way to do it.”

Negotiations with the Taliban

Welthungerhilfe may have international staff on the ground to help out soon. According to Pott, the organization has received written confirmation from the Taliban that Welthungerhilfe will be allowed to provide humanitarian aid in all provinces. “We are looking very carefully at the conditions that would allow staff to return,” Pott said. “We plan to return in the next few weeks.” But he warns that the situation in Afghanistan could change at any time.

For Caritas, the situation is still too unstable to send international staff back to the country. This is mainly because the Taliban are a heterogeneous group, says Recker. “The leaders, who are also negotiating in Doha, say one thing. But the infantry, who have their own interests, do another.” This has led local staff to be insulted and threatened, even though leaders say Caritas can work in the country. More radical subgroups will not necessarily follow this line. Recker says the situation “should get more cohesive” for their staff to come back.

For the people on the ground, it means continued suffering. Even if aid organizations do manage to get international staff back in the field, there is a liquidity problem. Due to the sanctions and the banking crisis, even large organizations cannot afford the salaries of their local staff. Recker thinks the United Nations should be the solution. “The UN could act as a bank for us in Afghanistan. This means that the UN would bring money to Afghanistan on its planes. In principle, we could get it back there and use it to fund aid programs. But behind, there are negotiations which take time. “

One-off payments are supposed to bring relief. The EU has announced multibillion aid to Afghanistan ahead of a special G20 summit. “The will of the international community to help is there,” said Pott.

Stöbe is more critical. As long as the sanctions are in place, he said, one-off payments are of no use. Ultimately, it is the Afghan people who will suffer.