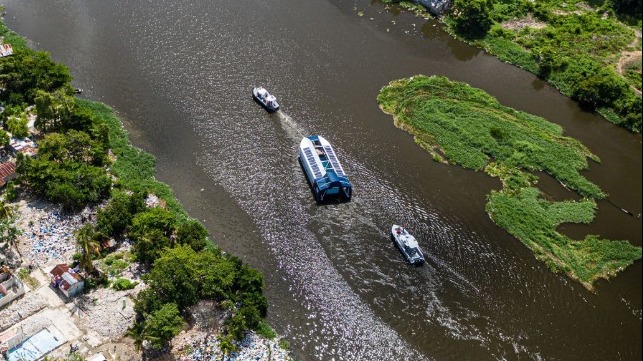 
As part of the effort to stem the tide of plastic pollution entering the world’s oceans, the Coca-Cola company is partnering with The Ocean Cleanup to accelerate the deployment of cleaning systems in fifteen rivers around the world . The partnership is part of the Dutch non-profit foundation’s efforts to stop plastic pollution by capturing it before it enters the world’s oceans.

Through this partnership, The Ocean Cleanup, in collaboration with Coca-Cola, will implement the technology of the foundation known as Inceptor in fifteen rivers by the end of 2022. Two interceptors included in the partnership have already been installed in Santo Domingo, Dominican Republic, and Can Tho, Vietnam. For these rivers, the partnership will support the development of solutions for the management of collected waste.

The organizations plan to expand the Inceptor Project footprint to an additional thirteen rivers over the next 18 months. In addition, they also hope to engage and mobilize both industry and individuals around the world to tackle plastic pollution, eliminating plastic waste that enters the world’s oceans and supporting ecosystems and water resources. .

“Ocean Cleanup’s mission is to rid the oceans of plastic,” said Boyan Slat, Founder and CEO of The Ocean Cleanup. “With 1,000 rivers emitting nearly 80% of the plastic carried by rivers into the oceans, this massive problem is getting worse by the day, which is why we are always looking to accelerate our progress. Among the waste that we collect with our cleaning systems we find many plastic bottles, including Coca-Cola packaging, so I congratulate them for being the first in the industry to join our mission, as part of their broader actions to positively impact global plastic pollution. Our clear intention is to learn from this partnership, which has the potential to evolve in the future and continue to grow rapidly. That’s why I think this is good news for our oceans.

The Foundation’s Interceptor was unveiled in 2019 and is the first scalable solution to prevent plastic from entering the world’s oceans from rivers. It runs on solar energy, extracts waste independently and is capable of operating in most of the most polluting rivers in the world.

The partnership will provide support to the local community commitments needed to deploy new interceptors, as well as in the further processing of the collected plastic through waste management expertise. Ocean Cleanup and Coca-Cola will work together to secure new partners and the investments needed to continue to scale the business through the deployment of additional Interceptor solutions, as well as to secure license support and deploy River Monitoring System cameras. (RMS). conduct a more in-depth analysis of the pollution of waterways.

Brian Smith, President and COO of The Coca-Cola Company, said, “The Ocean Cleanup has a clear vision and proven technologies to support its goal of ridding the world’s oceans of plastic. At Coca-Cola, we have teams on the ground that will support the deployment of new interceptors in rivers around the world, as well as the treatment and recycling of collected waste. By working together we believe we can have a real impact. It’s exciting: it’s something that we know our employees around the world will support, helping to support local implementation work and as ambassadors of the larger mission.

According to The Ocean Cleanup, tackling plastic waste will require actions and reflections from the best and the brightest, including civil society, industry peers and the public sector. As a result, The Coca-Cola Company has helped establish or joined global partnerships that will help realize the vision of a waste-free world. The collective goal is to encourage more people to recycle and reuse and more organizations to invest in the circular economy, in which end-of-life products and materials retain their value and are returned to the recycling process. manufacturing in a closed process. loop in which little or nothing is wasted.