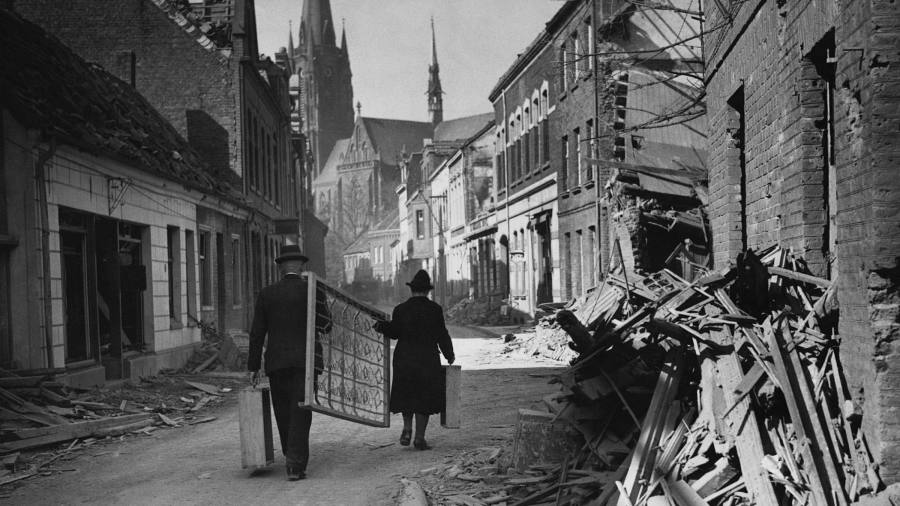 There have been many books on Germany in the immediate postwar years, and they are still coming. I should know: I wrote one myself, and I wasn’t the first either. It’s a topic that seems doomed to sell: there is blood, blood and retaliation, plus there is genuine interest in how people survived the so-called “zero hour”, when the clock stopped and started again. Not that there ever was a “zero hour”: unless the Germans suffered from amnesia from the shells, everyone brought something from the old era to the new.

Journalist and historian Volker Ullrich chose to write about the end of the war rather than the postwar period; the time between Hitler’s suicide in the bunker on April 30 and the signing of the ceasefire in Berlin on May 8. The British shut it down, grossly humiliating ministers and generals. There’s a lot of meat on the bone to all of this and Ullrich delivers a hard-hitting tale that turns the pages.

The geopolitical problem at the time was a suspicion in some quarters that the “Anglo-Americans” (as the Germans called them) might join the remnants of Hitler’s army and attack the Soviet Union. Certainly, there were those in the US and UK government and high command who wanted this, and many prominent Nazis clung to the idea as their last hope. Stalin, too, was aware of the danger. In the end, the alliance held out, at least until the start of the Cold War.

But there is still a lot to be said about Germany in the immediate postwar years, and the work of Ullrich and a book by fellow journalist Harald Jähner are remarkable in that they are both written by Germans. For this reason, perhaps, Ullrich and Jähner point out the lack of contrition on the part of the defeated Germans. They seemed unwilling to acknowledge the genocidal crimes they had committed both in the camps and on the ground. The Allied occupation used the notion of collective guilt to subjugate them: every male jack was guilty, which could have stretched a point here and there. No one voted for the war, and the last “referendum” was held in 1938.

Where Ullrich’s Book Eight days in May is the political and military history, that of Jähner Consequences is literary and social. Where Ullrich’s story is very familiar, Jähner’s story is often new. As the title suggests, Consequences takes in the immediate post-war years when Germany was administered by the Allies as well as the turmoil of recovery both in the Bonn Republic of Konrad Adenauer and in East Germany under Walter Ulbricht.

There were plenty of Nazis. In West Germany they were restless in the police and the judiciary – in government too, until Willy Brandt became chancellor of an administration led by the Social Democrats in 1969. No wonder that it took so long for those who opposed Nazism to be recognized or heard. .

Jähner excels in Consequences in his description of ordinary people: young Germans trying to shake part of the rubble from their hair. There was a habit of dancing, even though there were very few young Germans around. The Western Allies had banned “brotherhood” – fraternization with the enemy – but the order proved unenforceable. Many soldiers, both east and west, simply helped themselves. Prostitution was as widespread as venereal disease.

At first, Germany had to contend with a complete lack of infrastructure (a train journey from Hamburg to Munich could take a week; today it takes just over six hours). It was teeming with bands of belligerent “DPs” (displaced persons – some of Hitler’s 7 million foreign slaves), Jews seeking to travel to the United States or Palestine, soldiers returning from as far away as the United States. Ural to wives who had lost hope of seeing them again. , or the expelled Germans whose houses on the other side of the Oder had been allocated to Poland or Russia and were seeking accommodation in a truncated Reich. These “Prussian” newcomers were hardly received with open arms.

The Germans were once again ready for glamor. It meant vacations, movie comedies, kidney tables and the swing

The image of the law-abiding German has collapsed: they rushed and pilfered for food and their children. Once the black market and the “cigarette economy” gave way to the new Deutsche Mark and the Wirtschaftswunder (economic miracle) dawned, the Germans were again ready for glamor. It meant vacations, movie comedies, kidney tables and the swing – which was all the more respectable since the Nazis had banned it.

These two books fit together well, as their sources are sometimes the same. The occupation of Germany was billed as a “Carthaginian peace,” one that would virtually wipe out the defeated party, but some of the more extreme policy proposals, such as global deindustrialization, were quickly dropped. With the outbreak of the Cold War, the West felt the need to have the Germans on its side, just as some Nazis hopefully predicted. When this happened, life in West Germany at least returned to some sort of normalcy where they were able to cultivate collective amnesia.

Giles MacDonogh is the author of ‘After the Reich: From the liberation of Vienna to the Berlin airlift ‘