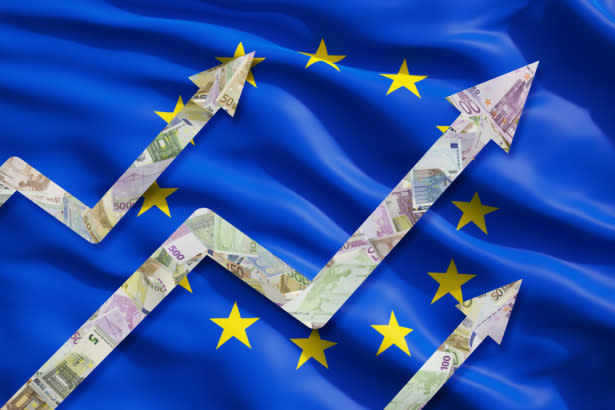 However, disappointing economic data from Germany pegged the DAX30 during the week.

Upward revisions to service sector PMIs for France, Germany and the euro area and positive data from the United States have provided support.

Progress on Capitol Hill towards a debt ceiling deal has also been positive for the markets.

At the start of the week, the services sector PMIs for September were in the spotlight.

The final figures for France and Germany were also disappointing.

Due to better figures from France and Germany, the Eurozone services PMI index fell from 59.0 to 56.4, down from 56.3 previously.

Through the 2sd half the week, the German economy was the center of attention, with statistics skewed negative.

While statistics were essential, the ECB’s monetary policy minutes were also the center of attention at the weekend.

There were no major surprises, however, as the markets and the ECB were more concerned about the impact of the latest inflation figures on monetary policy.

At the start of the week, factory orders and ISM non-manufacturing PMI numbers were the center of attention.

Much attention has been paid to the PMI index, with particular attention to the sub-components of employment and inflation.

In September, the employment sub-index edged down from 53.7 to 53.0. Inflationary pressures intensified, however, with the sub-index rising from 75.4 to 77.5.

ADP’s non-farm figures on Wednesday had a relatively moderate impact on markets. In recent months, significant discrepancies with government figures have mitigated the impact on the markets.

Nonetheless, in September, the ADP reported a 568,000 increase in non-farm payrolls after an increase of 340,000 in August.

Unemployment claims on Thursday drew attention ahead of September’s NFP figures on Friday.

More importantly, however, the non-farm payroll only increased by 194,000 in September, well below the expected increase of 500,000. Although lower, the unemployment rate fell by 5.2%. at 4.8%, partly due to a lower participation rate.

From DAX, it was another mixed week for the automotive sector. Continental and Daimler led the way, the two rallying 4.44%. Bmw also found support, up 0.99%, while Volkswagen fell 1.91%.

It has been a bullish week for the banking sector. German Bank increased by 3.30%, with Commercial bank end the week up 8.68%.

It was a relatively bullish week for the French automotive sector. Stellantis SA and Renault increased by 1.09% and 1.62% respectively.

It came back in the red for the VIX in the week ending 8e October.

4 days in the red after 5 sessions, which included a 7.23% drop on Tuesday, delivered the setback for the week.

It’s a relatively quiet week ahead on the economic calendar.

At the start of the week, the ZEW economic sentiment figures for Germany and the Eurozone will be the center of attention.

For the eurozone, industrial production and trade data will also attract attention on Wednesday and Friday.

With increased market sensitivity to inflation, the finalized September inflation figures for Member States will influence the week. Expect upward revisions to preliminary numbers to test the majors’ support.

In the United States, Wednesday’s inflation numbers will be key, along with Friday’s retail sales numbers.

After relatively disappointing NFP figures from last week, weekly jobless claims will also have an influence on Thursday.

Outside of China, trade data and inflation figures for September are due for review on Wednesday and Thursday.

Outside of the economic calendar, central bank chatter and geopolitics will also be the focus.