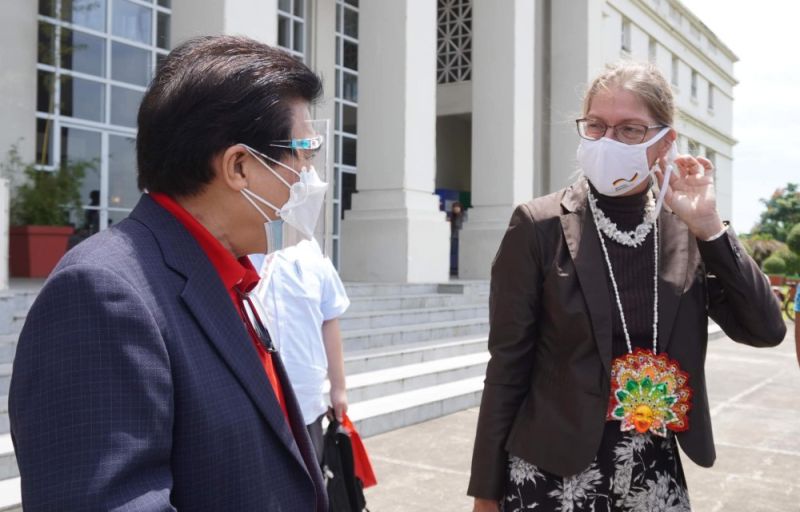 The German Ambassador to the Philippines sees enormous potential for cooperation between her country and Negros Occidental as well as its capital Bacolod City.

Ambassador Anke Reiffenstuel, who was in the provinces on Wednesday October 13, 2021, said she was really impressed to find such enormous cooperation potential here.

Reiffenstuel said there is an interest in increasing the renewable energy sector here and this is something that interests German businesses, the economy and partners.

“It is too early to tell, but I am happy to have been able to withdraw these comments and contributions which I received this morning during the exchange with the mayor and the leaders of the city to our business partners, and to follow up with our headquarters and report back on these experiences, ”she added.

The German envoy said this during her courtesy visit to Mayor Evelio Leonardia and other city officials at the center of Bacolod city government.

She was accompanied by the political adviser of the German embassy, ​​Lanz Paningbatan.

Leonardia said he was happy Reiffenstuel told him Bacolod was one of her favorite cities.

The mayor said the ambassador was exploring possibilities, including investments, and told him that Bacolod was regularly on the annual list of best business cities in the Philippines.

The recognition was awarded by the Philippine Chamber of Commerce and Industry, the largest organization of business leaders in the country.

As for the coronavirus disease (Covid-19) being a global pandemic, Leonardia also stressed to the Ambassador that this is the time when they will take the road to recovery and that they should exchange notes and compare their situation. with this one. from Germany so that they can learn from each other.

“She was very receptive to this,” Leonardia said.

“As we move on this road to recovery, we would like some advice from the German Embassy, ​​as if there are programs we can implement here that can speed up our recovery from the pandemic,” added the mayor.

Reiffenstuel thanked the local authorities for welcoming her to this “beautiful city”.

“It’s a learning experience meeting people and organizations here. I have to come back because I have so much more to know and see, ”she added.

The Ambassador also visited the Governor of Negros Occidental, Eugenio Jose Lacson, at the Provincial Capitol in the city of Bacolod.

The officials spoke about business and investment opportunities as well as tourism promotion for the province.

Reiffenstuel was assigned to the German Embassy in Manila in August 2019.

She has worked in the diplomatic service since 1993. Her assignments included the German embassies in Berlin, London, New Delhi and Cairo. (APN with PR reports)