More than half of the brands in the ranking come from three countries: Germany, France and Great Britain.

The top ten also include: Shell, BMW, Porsche, BP, Siemens, EY and Allianz. Seven of the top ten brands come from Germany, two from Great Britain and one from the Netherlands.

Ferrari is the most powerful brand in Europe

Among the other branches of the economy, brands in the banking sector recorded the largest decline in value in the table, while the commerce sector was one of the few sectors to register an increase.

The list of the most powerful European brands was opened by the Italian Ferrari ahead of SBER and MTC. The next places on the list were Lego, EY, Rolex, Swisscom, Moncler, Gucci and Gazprom. 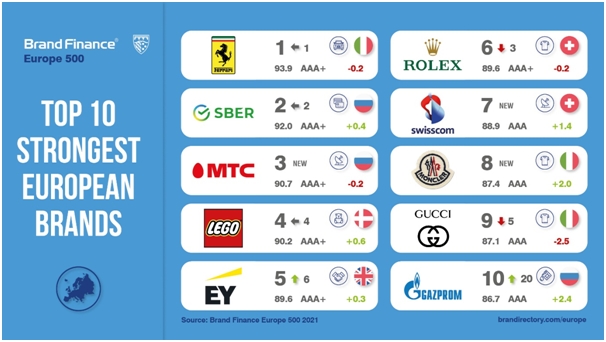 – With such strong domination of the largest European economies – Germany, France and Great Britain, conquering the continent is not easy for brands in small markets. It is necessary to invest in building strong brands and supporting expansion into foreign markets, which will also have a positive impact on the future development of local economies – comments Richard Hay, Managing Director of Brand Finance.